Poet of the People: The Greatness of Langston Hughes

18feb6:00 pm- 7:00 pmPoet of the People: The Greatness of Langston HughesA Conversation with Brent Hayes Edwards and Rafia Zafar

Library of America presents    Poet of the People: The Greatness of Langston Hughes Thursday,

Poet of the People: The Greatness of Langston Hughes

One hundred years ago Langston Hughes published his now-famous first poem, “The Negro Speaks of Rivers.” In the decades that followed, as both a longtime resident of Harlem and a cosmopolitan world traveler, Hughes wrote of Black life in masterful, deceptively simple poems and prose that made him one of the most popular and influential writers of the twentieth century.

Join Brent Hayes Edwards, Director of the Schomburg Center’s Scholars-in-Residence Program and Professor of English and Comparative Literature at Columbia University, and Rafia Zafar, Professor of English and African American Studies at Washington University in St. Louis and editor of Library of America’s two-volume collection of Harlem Renaissance novels, for a conversation about Hughes’s greatness and his centrality for American literature and the culture of the global African diaspora. Featuring readings by poets Kevin Young and Tyehimba Jess.

This event is free and open to everyone but registration is required. Please CLICK HERE to register

This program is part of LOA LIVE, Library of America’s series of online programs featuring distinguished writers, historians, and literary scholars discussing timely topics and themes inspired by writings in the authoritative Library of America series. The free presentations are attended by viewers in all 50 states and 44 other countries around the globe. Learn more and view past programs at www.loa.org/events.

IRAAS and AAADS with support from the Mellon Foundation
Launch New Conversation Series,  Black Arts Dialogues (BAD)
“Intimate, dynamic conversations about art and process with Black artists of distinction” –
Ayana Mathis, Host and Curator of the Series
On Tuesday, February 23rd the Black Arts Dialogues will live stream its inaugural event, an hour-long virtual conversation with jazz innovator, pianist, and composer Jason Moran and BAD host and curator, award-winning author Ayana Mathis. Moran will join Mathis for an informal and wide-ranging conversation about jazz, artistic collaboration, and of course, Moran’s work, including his 2019 boundary shattering solo show at the Whitney Museum of American Art, his work at the Kennedy Center and his most recent album, The Sound Will Tell You, released in January 2021.
The inaugural conversation will stream live via Zoom at 7 pm EST. Attendance is free but pre-registration is required.
Please register here: https://bit.ly/3pKNs0k
The Washington Post describes Moran’s work as, “borderless bigness.” The New York Times has said of him: “The broader his artistic identity grows, the more Jason Moran, 44, seems like the elder statesman-to-be that jazz has been waiting for.”
The Black Arts Dialogues (BAD) is a limited, biannual series of one-on-one conversations – intimate, inspired and inspiring – about art and Blackness with artists of distinction in various disciplines, from musicians to directors, fashion designers to filmmakers. BAD is a celebration of excellence, a space of curiosity and exploration for artists to discuss their creative process, challenges, goals and expertise.
For more information about the series, its guests or host Ayana Mathis please visit: https://afamstudies.columbia.edu/content/black-arts-dialogues
The Black Arts Dialogues (BAD) is hosted by the Institute for Research in African American Studies (IRAAS) in the African American and African Diaspora Studies Department (AAADS) at Columbia University.
BAD is produced by the Mellon Arts Project with support from the Mellon Foundation.
https://afamstudies.columbia.edu/mellon-arts-project

Wednesday February 24, 2021 at 6:3pm Est. Join us for a fascinating discussion with Dr. Michael Eric 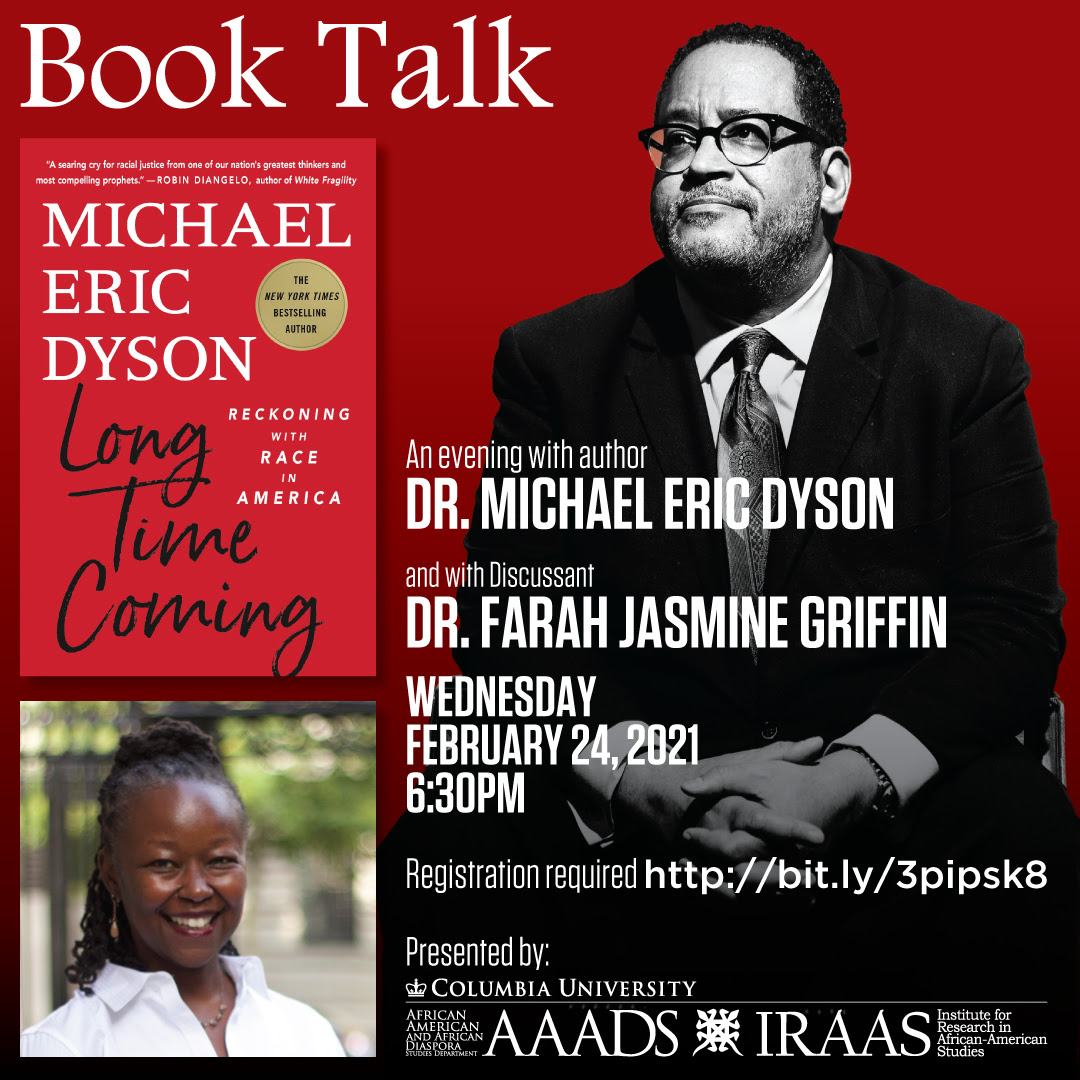 Wednesday February 24, 2021 at 6:3pm Est.
Join us for a fascinating discussion with Dr. Michael Eric Dyson on his book “Long Time Coming: Reckoning with Race in America” with Dr. Farah Jasmine Griffin as discussant.
“In five beautifully argued chapters―each addressed to a black martyr from Breonna Taylor to Rev. Clementa Pinckney―Dyson traces the genealogy of anti-blackness from the slave ship to the street corner where Floyd lost his life―and where America gained its will to confront the ugly truth of systemic racism. Ending with a poignant plea for hope, Dyson’s exciting new book points the way to social redemption. Long Time Coming is a necessary guide to help America finally reckon with race.” – Macmillan Publishers
Pre- Registration is required
Registration link
https://columbiauniversity.zoom.us/webinar/register/WN_LGjcmqSkQHSrod9BNYLoag
Author Bio
Michael Eric Dyson is one of the nation’s most renowned professors, gifted writers, inspiring preachers, knowledgeable lecturers and prominent media personalities. As a teacher who earned a PhD in Religion from Princeton University, Dyson has taught at some of the nation’s most distinguished universities, including Brown, UNC Chapel Hill, Columbia, DePaul, the University of Pennsylvania, and Georgetown University. He is presently Distinguished University Professor of African American and Diaspora Studies, College of Arts & Science, and Distinguished University Professor of Ethics and Society, The Divinity School, and Centennial Professor at Vanderbilt University. Dyson is one of America’s premier public intellectuals and author of over 20 books, including seven New York Times bestsellers, and is a political analyst for MSNBC. He has won two NAACP Image Awards and an American Book Award, and last year was awarded the Langston Hughes Medal.
Dyson has written bestselling volumes on Martin Luther King, Jr., Malcolm X, 2Pac, Marvin Gaye, Bill Cosby, and Barack Obama. Dyson’s New York Times bestselling Tears We Cannot Stop: A Sermon to White America, was called by the New York Times, ”one of the most frank and searing discussions on race…a deeply serious, urgent book, which should take its place in the tradition of Baldwin’s The Fire Next Time and King’s Why We Can’t Wait.” The book won the 2018 Southern Book Prize. In December 2020, Dyson published the instant national bestseller Long Time Coming: Reckoning with Race in America, which Robin DiAngelo calls a “searing cry for racial justice from one of our nation’s greatest thinkers and most compelling prophets.” Kirkus Review says it is a “sweeping overview of racism in America” and a “timely, fervent message from an important voice,” while NPR says that “the writing is smart and the research that informs it is great, but what makes this an important book is Dyson’s voice, which is strong but always pregnant with frustration, pain, admiration and, ultimately, hope.”
As a preacher and sometime pastor for more than 40 years, Dyson has mounted many of the nation’s most noted pulpits to deliver sermons, including, most recently, the Washington National Cathedral where Martin Luther King, Jr., delivered his last Sunday sermon. Dyson has lectured across the country, and around the world, in many of the best colleges and universities, and in public theaters and auditoriums, and for many corporations and unions. He has also served for the last 30 years as a media commentator – and occasionally host – on every major radio and television show. Dyson has even found time to make guest appearances on scripted cable and network television programs such as Soul Food, The Game and Black-ish. While feminist author Naomi Wolf calls Dyson “the ideal public intellectual of our times,” writer Nathan McCall captures it best when he says that Dyson “is a street fighter in suit and tie.”
Discussant Bio
Farah Jasmine Griffin is the inaugural Chair of the African American and African Diaspora Studies Department at Columbia University. She is also the William B. Ransford Professor of English and Comparative Literature. Professor Griffin received her B.A. from Harvard and her Ph.D. in American Studies from Yale.  Griffin is the author of Who Set You Flowin?: The African American Migration Narrative (Oxford, 1995), Beloved Sisters and Loving Friends:  Letters from Rebecca Primus of Royal Oak, Maryland, and Addie Brown of Hartford Connecticut, 1854-1868 (Alfred A. Knopf, 1999), If You Can’t Be Free, Be a Mystery: In Search of Billie Holiday (Free Press, 2001) and co-author, with Salim Washington, of Clawing At the Limits of Cool: Miles Davis, John Coltrane, and the Greatest Jazz Collaboration Ever (Thomas Dunne, 2008). Harlem Nocturne: Women Artists and Progressive Politics During World War II, was published by Basic Books in 2013.  Griffin collaborated with composer, pianist, Geri Allen and director, actor S. Epatha Merkerson on two theatrical projects, for which she wrote the book: The first, “Geri Allen and Friends Celebrate the Great Jazz Women of the Apollo,” with Lizz Wright, Dianne Reeves, Teri Lyne Carrington and others, premiered on the main stage of the Apollo Theater in May of 2013. The second, “A Conversation with Mary Lou” featuring vocalist Carmen Lundy, premiered at Harlem Stage in March 2014 and was performed at The John F. Kennedy Center in May of 2016.
Her forthcoming book, Read Until You Understand: The Profound Wisdom of Black Life and Literature will be published by W.W. Norton in September, 2021.