The revolutionary integration of research and teaching at the Center for Jazz Studies is powered by Columbia faculty who count among the leading figures in the field: George E. Lewis, Brent Hayes Edwards, Christopher Washburne, Robert O’Meally, Ann Douglas, Farah Jasmine Griffin, and John Szwed, the Center’s current Director. Core and affiliated Center faculty serve as sponsors, co-sponsors, and readers for doctoral students engaged in research related to jazz studies, working to create the next generation of scholars in the field.

More than 30 of Bearden’s iconic autobiographical works shown together

for the first time in nearly 40 years

This Month the High Museum of Art will premiere “Something Over Something Else: Romare Bearden’s Profile Series,” the first exhibition to bring dozens of works from the eminent series together since its debut nearly 40 years ago. Following its presentation at the High (Sept. 14, 2019 through Feb. 2, 2020), the exhibition will travel to the Cincinnati Art Museum (Feb. 28–May 24, 2020).

In November 1977, The New Yorker magazine published a feature-length biography of Bearden (American, 1911–1988) by Calvin Tomkins as part of its “Profiles” series. The article brought national focus to the artist, whose rise had been virtually meteoric since the late 1960s. The experience of the interview prompted Bearden to launch an autobiographical collection he called “Profile.” He sequenced the project in two parts: “Part I, The Twenties,” featuring memories from his youth in Charlotte, N.C., and in Pittsburgh, and “Part II, The Thirties,” about his early adult life in New York. For the series’ exhibitions in New York in 1978 and 1981, Bearden collaborated with friend and writer Albert Murray on short statements for the pieces, which were scripted onto the walls to lead visitors on a visual and poetic journey through the works.

Inspired by the High’s recent acquisition of a key work from the series, “Something Over Something Else” is the first exhibition to reassemble more than 30 collages from the series. The exhibition design references the experience of the series’ original gallery presentations by incorporating their handwritten captions into the accompanying wall texts. The project is co-curated by Stephanie Heydt, the High’s Margaret and Terry Stent Curator of American Art, and Bearden scholar Robert G. O’Meally, Zora Neale Hurston professor of English and comparative literature at Columbia University.

“We are privileged to organize ‘Something Over Something Else,’ which honors Bearden’s legacy as one of the 20th century’s most influential artists and brings important recognition to this beautiful and powerful series,” said Rand Suffolk, Nancy and Holcombe T. Green, Jr., director of the High.

“We are very excited to reassemble Bearden’s original ‘Profile’ project—and to experience these works along with their captions, presented in the original sequence,” said Heydt. “Bearden was a wonderful storyteller, and ‘Profile’ shows Bearden at his best, using words and images to evoke deeply personal memories. But Bearden also invites us all to find something to relate to along the way. There is a poetry in the arrangement of the exhibition that feels unique for Bearden’s work and this show, which assembles nearly two-thirds of the original group and may be the only opportunity to see those works together again.”

Bearden presented the “Profile” series as a shared history—his reflection on a life path that follows the journey of migration and transition in black communities across the mid-20th century. The series is an origin story that tracks Bearden’s transition from rural South to urban North, weaving his personal history into a communal one. Beyond providing the opportunity to explore an understudied body of work, the exhibition investigates the roles of narrative and self-presentation for an artist who made a career of creating works based on memory and experience. It also reveals some of Bearden’s broader inspirations, which lend insight into American life in the first decades of the 20th century.

Heydt was inspired to develop the exhibition in 2014 when the High acquired “Profile/Part II, The Thirties: Artist with Painting & Model” (1981), the culminating work in the series and one of Bearden’s only known self-portraits. The collage, which features prominently in the exhibition, is a retrospective work in which Bearden brings together important memories and spiritual influences from his youth in the South with broader art-historical themes that guided his career for more than four decades.

The exhibition is arranged roughly chronologically according to the original presentations, moving from collages featuring Bearden’s early memories to works exploring his development as an artist in New York. Thematically, the subjects range from neighbors, friends, music and church to work, play, love and loss. The works also vary greatly in size. Though some are large, many are diminutive, a deliberate choice by Bearden to convey his experience of revisiting childhood memories. In addition to the wall texts by Bearden and Murray, the galleries feature an original copy of The New Yorker article and the catalogues from the 1978 and 1981 gallery exhibitions. The High also show clips from the 1980 documentary “Bearden Plays Bearden,” directed by Nelson E. Breen.

Part I, The Twenties:

“Something Over Something Else: Romare Bearden’s Profile Series” is presented in the special exhibition gallery on the second level of the High’s Stent Family Wing.

Join Stephanie Heydt, the High’s Margaret and Terry Stent curator of American art, and Robert G. O’Meally, Zora Neale Hurston professor of English and comparative literature at Columbia University and founder and director of Columbia’s Center for Jazz Studies, as they talk about bringing this exhibition to life.
Seating is limited. Please reserve your tickets in advance.
Free with Museum admission ($14.50); Free for members. For more information please click HERE

On the second Sunday of each month the High offers free admission for all visitors and special family-friendly programming. At the October event, you can make a Romare Bearden-inspired collage and enjoy jazz performances in the Atrium.

Don’t miss this special afternoon of live music inspired by “‘Something Over Something Else’: Romare Bearden’s Profile Series.” Take a musical journey through this exhibition with your guides: composer, musician, educator, and pastor Rev. Dr. Dwight Andrews and Robert G. O’Meally, the exhibition’s co-curator. They will explore how Bearden’s work has inspired other artists across many different media.
Free with Museum admission ($14.50); Free for members. For more information please click HERE

Explore the theme of journeying and movement South to North in Bearden’s work with special guest Dr. Farah Jasmine Griffin, the William B. Ransford professor of English and comparative literature and African-American studies at Columbia University. The author of several books, Griffin writes and speaks extensively on American and African-American literature, music, art, history and politics.

About the High Museum of Art
Located in the heart of Atlanta, Georgia, the High Museum of Art connects with audiences from across the Southeast and around the world through its distinguished collection, dynamic schedule of special exhibitions and engaging community-focused programs. Housed within facilities designed by Pritzker Prize–winning architects Richard Meier and Renzo Piano, the High features a collection of more than 17,000 works of art, including an extensive anthology of 19th- and 20th-century American fine and decorative arts; major holdings of photography and folk and self-taught work, especially that of artists from the American South; burgeoning collections of modern and contemporary art, including paintings, sculpture, new media and design; a growing collection of African art, with work dating from pre-history through the present; and significant holdings of European paintings and works on paper. The High is dedicated to reflecting the diversity of its communities and offering a variety of exhibitions and educational programs that engage visitors with the world of art, the lives of artists and the creative process. For more information about the High, visit www.high.org.
# # #
INTERVIEWS AND DIGITAL IMAGES AVAILABLE UPON REQUEST
Media contact:

The High Museum of Art

Working Together: Louis Draper and the Kamoinge Workshop

Working Together: Louis Draper and the Kamoinge WorkshopExhibition: FEBRUARY 1, 2020 – JUNE 14, 2020

Working Together: Louis Draper and the Kamoinge Workshop Inspired by the

Working Together: Louis Draper and the Kamoinge Workshop 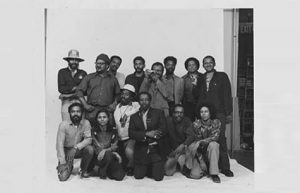 When the collective began in New York City, they selected the name Kamoinge, which means “a group of people acting and working together” in Gikuyu, the language of the Kikuyu people of Kenya. They met weekly, exhibited and published together, and pushed each other to expand the boundaries of photography as an art form during a critical era of Black self-determination in the 1960s and 1970s.

The group organized several shows in their own gallery space, in addition to exhibitions at the Studio Museum in Harlem and the International Center for Photography. They were also the driving force behind The Black Photographers Annual, a publication founded by Kamoinge member Beuford Smith, which featured the work of a wide variety of Black photographers at a time when mainstream publications offered them few opportunities.

In the continuing spirit of Kamoinge, Shawn Walker, Beuford Smith, Herb Robinson, and Tony Barboza have also made significant archival contributions and are among the nine members who recorded oral histories to provide the fullest account of the group’s first two decades. In addition, through a generous grant from the National Endowment of the Humanities, VMFA has digitized the Draper archive—which will be available online.

Working Together: Louis Draper and the Kamoinge Workshop
is organized by the Virginia Museum of Fine Arts.

Generous support for this project was provided by Bank of America Art Conservation Project
and the National Endowment for the Humanities.