At the Center for Jazz Studies, jazz becomes a music without borders that provides new models for innovative teaching and scholarly inquiry in the arts, humanities, and sciences. Our themes of internationalization, technology and community encourage excellence in research, in the teaching of music and culture, and in the presentation of public events. The Center views the interdisciplinary expansion of the intellectual conversation surrounding jazz, and especially its lifeblood practice, improvisation, as tracing a path toward the development of new knowledge that illuminates the human condition.

Since its founding in 1999, the Center for Jazz Studies has been integrated into Columbia’s renowned Core Curriculum, so that the College’s students gain exposure to the study of jazz. The Center’s faculty offer at least four major courses per year on jazz, attracting about 500 students, and support a jazz studies special concentration.

Generous support from the Louis Armstrong Educational Foundation makes possible the Center’s Conversations and Performance Series, an initiative that aims to explore the role of improvisation in the widest array of fields and practices. The guiding premise of the series is that the study of improvisation can present not only a new animating paradigm for scholarly inquiry in the humanities, the arts, and the social, political, and even natural sciences, but also a set of trenchant models for political, cultural, and ethical dialogue and action that can foster community building across national and cultural boundaries. 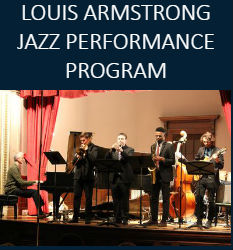 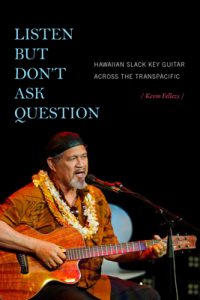 Performed on an acoustic steel-string guitar with open tunings and a finger-picking technique, Hawaiian slack key guitar music emerged in the mid-nineteenth century. Though performed on a non-Hawaiian instrument, it is widely considered to be an authentic Hawaiian tradition grounded in Hawaiian aesthetics and cultural values. In Listen But Don’t Ask Question Kevin Fellezs listens to Kanaka Maoli (Native Hawaiian) and non-Hawaiian slack key guitarists in Hawai‘i, California, and Japan, attentive to the ways in which notions of Kanaka Maoli belonging and authenticity are negotiated and articulated in all three locations.

In Hawai‘i, slack key guitar functions as a sign of Kanaka Maoli cultural renewal, resilience, and resistance in the face of appropriation and occupation, while in Japan it nurtures a merged Japanese-Hawaiian artistic and cultural sensibility. For diasporic Hawaiians in California, it provides a way to claim Hawaiian identity. By demonstrating how slack key guitar is a site for the articulation of Hawaiian values, Fellezs illuminates how slack key guitarists are reconfiguring notions of Hawaiian belonging, aesthetics, and politics throughout the transPacific.

This event is free and open to the public but registration is required. For more information and to register

This event will take place in-person at the Heyman Center and virtually over Zoom. We ask that everyone register via Zoom, even those who plan to attend in-person.

Attendance at SOF/Heyman events will follow Columbia-issued guidelines as they continue to develop. Given the current recommendations, we plan to allow in-person attendance for Columbia affiliates who have conformed with the on-campus guidelines. For everyone else, we’re planning to livestream this event, allowing for virtual attendance.

Please email disability@columbia.edu to request disability accommodations. Advance notice is necessary to arrange for some accessibility needs. This event will be recorded. By being electronically present, you consent to the SOF/Heyman using such video for promotional purposes.

Kevin Fellezs is Associate Professor of Music, Ethnomusicology & AAADS at Columbia University. He is the author of Birds of Fire: Jazz, Rock, Funk and the Creation of Fusion and Listen But Don’t Ask Question: Hawaiian Slack Key Guitar Across the TransPacific. He has also published articles in Jazz Perspectives, the Journal of Popular Music Studies, and the Journal of the Society for American Music.

Jessica Bissett-Perea is Associate Professor in the Department of Native American Studies at the University of California, Davis. Dr. Perea also co-directs the “Radical and Relational Approaches to Food Fermentation and Food Security” research cluster, which seeks to advance Indigenous knowledges and performing arts processes as a means to unsettle and densify modes of knowledge production and research in academia. Her first book Sound Relations: Native Ways of Doing Music History in Alaska will be published in fall 2021.

Aaron A. Fox is Associate Professor of Music and Ethnomusicology at Columbia University. He has published extensively on American country music and working-class culture. Aaron’s book, Real Country: Music and Language in Working-Class Culture, was published by Duke University Press in 2004.

Paige West is Claire Tow Professor of Anthropology at Columbia University. Dr. West has worked in Papua New Guinea since 1996 and has conducted over ninety months of field-based research in the country. In addition to her position as the Claire Tow Professor of Anthropology, Dr. West is the Director of the Center for the Study of Social Difference at Columbia University.

Chris Washburne is Associate Professor of Music at Columbia University and the founder and director of Columbia’s Louis Armstrong Jazz Performance Program. He has published numerous articles on jazz, Latin jazz, and salsa. His book, Sounding Salsa: Performing Latin Music in New York was published in 2008 by Temple University Press. He co-edited the volume Bad Music and is currently working on a book on Latin jazz which will be published by Oxford University Press.

Survey the the Harlem Renaissance (often called the New Negro Movement) and explore when, where, and how it began. Learn about its main proponents and accomplishments; when it ended and what was next in Black cultural history. To emphasize the point that the Renaissance comprised a tidal shift in Black consciousness, not only in poetry and the visual arts, not only among the elite, not only in Harlem or major cities, not only the United States, we will focus on three figures: Josephine Baker, Jack Johnson, and Duke Ellington. We also will consider three important framings of the Harlem Renaissance by modern/contemporary artists: Toni Morrison, August Wilson, and Isabel Wilkerson. Is the earth-shaking Black Lives Matter movement an extension of the early 20th century Harlem Renaissance?

For more information about this event and to purchase tickets, Please CLICK HERE

Robert G. O’Meally (he/his) is the Zora Neale Hurston Professor of English at Columbia University, where he has served on the faculty for thirty years. Director of Columbia’s Center for Jazz Studies, O’Meally is the author of The Craft of Ralph Ellison, Lady Day: The Many Faces of Billie Holiday, The Jazz Singers, and Romare Bearden: A Black Odyssey. His edited volumes include The Jazz Cadence of American Culture, Living With Music: Ralph Ellison’s Essays on Jazz, The Norton Anthology of African American Literature, History and Memory in African American Culture, and the Barnes and Noble editions of Mark Twain, Herman Melville, and Frederick Douglass.

For his production of a Smithsonian CD set called The Jazz Singers, he was nominated for a Grammy Award. The curator of exhibitions at Jazz at Lincoln Center (2006-2012), O’Meally also has co-curated exhibitions for the High Museum in Atlanta and for the Smithsonian Institution. He has held Guggenheim and Cullman Fellowships, among others. His new books are The Romare Bearden Reader (edited for Duke University Press, February 2019) and Antagonistic Cooperation: Collage, Jazz, and American Fiction (Columbia University Press, 2021). According to his sons, O’Meally plays the soprano saxophone “for his own amazement.”

This virtual lecture is presented live via Zoom. Participants can submit questions via the chat feature.

Registered users will be emailed a link to join this Zoom program. To get started, please download Zoom on your chosen device and explore the Frequently Asked Questions. This program will be recorded.

Tuesday, October 5: “Ethereal Frocks and Two Perfectly Matched Strings of Pearls:” Post and her Fashionable Daughters in the Roaring Twenties

Explore the Roaring Twenties from the comfort of your home through this livestream lecture series inspired by the exhibition Roaring Twenties: The Life and Style of Marjorie Merriweather Post.

The Arts Initiative and Miller Theatre

at Columbia University School of the Arts 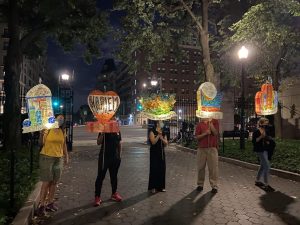 This year’s theme is inspired by the intersection of Shakespeare and Duke Ellington,
exploring the spirit of play while finding meaning within collective traditions.

Free as always • Virtual this year

Concept and direction by PROCESSIONAL ARTS WORKSHOP
Through distribution of “make-your-own” lantern kits, plus video tutorials
and virtual workshops, the public will collectively illuminate the night
with their one-of-a-kind lanterns, bringing light and life back to public space.

September 9-11, 2021
“Create your own lantern at home” kits will be distributed to registrants
at a socially-distanced pick-up location outside of Miller Theatre.

Watch the Video Celebration: Tuesday, October 26, 7:00 p.m.
Tune in to morningside-lights.com to watch the live premiere of the video celebration that includes user-generated content of the lantern-making process.

From Melissa Smey, Executive Director
Arts Initiative and Miller Theatre:
“We started Morningside Lights ten years ago with the goal of bringing communities together through art. This amazing project continues to exceed expectations in facilitating creativity and connections within our neighborhood and beyond. I am thrilled to join in the year-long campus celebration of Duke Ellington’s “Such Sweet Thunder” with our own Shakespearean theme of “Play On!” I hope you join us in playing and creating magic together.”

Columbia University School of the Artshttps://lenfest.arts.columbia.edu/events/complex-issues-south-pico-african-american-artists-los-angeles-1960s-and-1970s